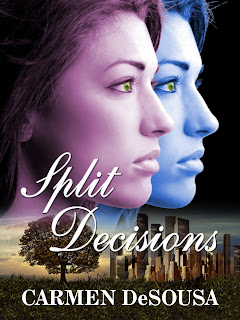 Split Decisions: Sometimes you want something so badly you are willing to abandon everything you’ve ever known—including yourself.

Eighteen years ago, Jaynee Monroe married the man of her dreams, became the mother of four, and fulfilled her career goals. About to turn forty, she senses something is missing from her idyllic life. While Googling her name in an attempt to find herself, she unearths something so impossible, she contemplates her own sanity. Seeking answers, she embarks on a journey to discover the truth, only to end up abducted by a deranged stranger who insists on calling her Caycee.

Caycee took the road less traveled. Rejecting a marriage proposal from the only decent man she ever knew, she ventures to California to become famous. Eighteen years later, success has left her alone and miserable. Attempting to locate her lost love on Facebook, she discovers his infatuation with her. Not only does his presumed-dead wife have Caycee’s uncommon middle name, it appears he has photo-shopped her face over hers.

Never could Caycee and Jaynee have imagined decisions they made years earlier would threaten not only their lives but also their loved ones. Caycee must now reunite with the southern gent she dismissed eighteen years ago and convince him to accompany her to New York to locate his wife, the most important person in both their lives.

A romantic-suspense writer, Carmen DeSousa’s books overflow with romance, mystery, suspense, and of course, tragedy. After all, what would a great story be without a tragic event setting the stage? Her sensual and gripping mysteries have earned bestseller status on three continents because of her ability to make readers love, laugh, cry, gasp, and hope.

All of Carmen’s novels are standalones; however, she does link each of her stories with a little surprise. If you read out of order, you’ll never notice. But if you read in order, it’s fun.

Find her novels in print and eBook formats at your favorite retailer.

How to reach Carmen:

Jaynee awoke with a start, salty tears streaming down her cheeks, burning her already chapped lips. She attempted to swallow, but didn’t have enough saliva to moisten her mouth. It’d just been a nightmare. The nightmare she used to have nightly after her father committed suicide. Though, she hadn’t had it in years. Not since Jordan had taken her away from her previous life, providing a stable home, love, and strong arms to shield her from the demons that haunted her.

Unfortunately, Jordan wasn’t here, and her surroundings were all too real. Pinpricks of sunlight streaked through the corners of the shaded windows, illuminating the dust motes dancing in the air.

The room was still dark in most spots, but she could almost make out her surroundings. It looked like a cabin of some sort. The walls were a dingy off-white or possibly just stained from years of exposure, but the ceiling and trim were dark wood along with the slatted floors. A musty scent permeated the area, irritating her sinuses, but she couldn’t even scratch her nose.

Cuffs still secured her to the four bedposts. What kind of sicko would do such a thing? Her arms and legs ached from the position they’d been in all night, and she had to go to the bathroom something awful.

When she opened her mouth to speak, nothing but a croak escaped, leaving a trail of lava in her parched throat. “Hel-lo?” Though her voice had cracked, she attempted to sound friendly. Screaming or sobbing wouldn’t do any good. Not that she had the strength or vocal cords anyway.

She wasn’t in the city; only the country would be as dark as it’d been last night when her assailant brought her here. Even if she screamed her head off, no one would hear. “Please,” she tried again. “I really have to use the bathroom.”

The door opened finally, the hinges protesting in a lengthy screech, begging for oil. Her captor entered the room still wearing a black ski mask, gloved, and the same dark jeans and thick overcoat he’d had on the previous evening. He wasn’t too tall or heavy. If given the chance, she could probably take him. Jordan had taught her a few things. But as long as he had the gun trained on her, she’d have to be submissive.

His gauntleted hand unlocked just one of her wrists. Then placing the key in her hand, he stepped back. Obviously she was to unlock her other restraints. She didn’t waste any time. She unlatched her left hand, then both of her ankles. After rubbing them to increase circulation, she jumped out of the bed on the opposite side of her detainer. He motioned with the gun that she should move to the door on the far side of the room. She did as instructed, opening the door to a small bathroom with just a sink and toilet. No window. She quickly relieved herself. It felt incredible; she’d actually been in pain.

When finished, she opened the medicine cabinet and cubbyhole under the sink, finding nothing usable as a weapon. Both rooms were completely barren, stripped of everything. The abduction had not been a coincidence, but premeditated.