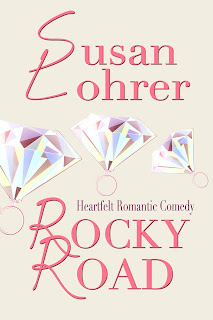 Physical therapist Nancy Anne Robertson has her sights set on her dream promotion.

Problem #1: she’s engaged to one of her patients, and if her secret gets out, she’ll lose her job altogether.

Problem #2: her ex-fiancé is back in town, shooting for the same promotion.

Complicating matters are two mothers (and one fiancé) with alarming secrets, an autistic brother with a penchant for wandering off at the most inconvenient times, and four rings—the fake diamond kind, the stolen kind, the sticky wax kind that belongs under a toilet . . . and maybe, just maybe, the kind meant to make a girl say I do.

Susan Lohrer grew up all over western Canada and lives in BC with her husband, their two children who are still at home, three dogs, and far too many aquariums. She believes life is always better with a healthy dose of humor.

Wouldn’t someone who really wanted to get married be a little more careful than this? Not that Ancy doubted Mark’s intentions. He was he One. And she wouldn’t nag him about it.

Honestly though, severing most of the nerves in his hand should’ve been enough for one week—but no! He had to go and whop himself on the head too. It wasn’t like Mark to be this accident-prone, and he’d been

getting worse over the last few months. Working too hard so he’d be a good provider, no doubt. that’s just the kind of guy he was. She smiled, visualizing him in a black tux.

Focusing on her impending nuptials usually distracted her from thinking about whether she’d make department head. And lately, her im-pending groom had been more than enough distraction.

She checked the temperature of the paraffin tub. “This’ll feel a little hot, but it’ll help with flexibility.” He grimaced as she dipped his right hand into the warm wax. Then he gave her bum a squeeze with the left one. “Quit it before someone sees us.”

Since he wasn’t dragging his feet—that much seemed obvious—why couldn’t he stay in one piece long enough to put some professional distance between them?

“Mark, you’ve dropped a wall on your head, nailed your foot to the floor, and dislocated your shoulder. Are you trying to get out of our wedding?”

Whoops. She bit her lip and glanced over her shoulder. Outpatient Physical Therapy was crowded in the afternoon. he last thing she needed was for someone to overhear her in a lover’s spat… with her patient. That would not only prevent her promotion to department head, it would end her career. Instantly. Working quickly, she covered the warm wax with a plastic bag, then slipped a padded mitten over the whole thing to lock in the heat.

If only there were a simple way to get around the patient-therapist dating taboo. But because her specialty was post-traumatic hand rehabilitation, she was the therapist most qualified to care for Mark’s injuries—so she and Mark were forced into secrecy until he regained the use of his hand. “Well, couldn’t you try to be just a little more careful?” She kept her voice to a low hiss. “At this rate, I’ll be ninety by the time we even set the date.”

“Aw Ancy, a few more weeks and this thing will be as good as new.” He grinned and held up his thickly swaddled hand.

Yeah, right. She’d treated her share of injuries. his one was far from pretty, even though she hadn’t seen it until after the surgery. His poor body.

“Please just be more careful. I want to wear my ring on my finger, not on my necklace where no one can see it.” She displayed her perfectly healthy left hand, its third finger perfectly naked. Did Mark have any idea how hard it was on her to keep this a secret? And not just from the department—from Jen, her best friend in the whole world.

Though she was the one best qualified to treat Mark, Jen—perky, sexy Jen—could have treated his injuries. But then Jen and Mark—not that she didn’t trust him—but why create temptation by throwing her beefcake fiancé into the capable arms of her best friend? Besides, every difficult PT case brought her another step closer to becoming department head. She couldn’t risk losing that kind of security, not when she almost had it in her grasp.

“Promise me you’ll be careful.”

“You worry too much.” He looked so hot when he gave her that wink that said she could count on him no matter what.

“Mark, I’m serious.” She added a stern, professional note to her voice as Doris Ridgewood, the department head—who was due for retirement any second—passed by. “You have to take some time of work to rest. If you don’t, you’ll never regain full use of your hand.”

Doris nodded approvingly and continued on her way.

“What is?” She checked her watch. Almost time to unwrap the hand and work on scar mobility.

“Knowing you’ll be mine to have and to hold.” He waggled his dark brows meaningfully. “His hand is going to make a full recovery, and you know what I’m gonna do with it.”

She could feel the blood rushing from her extremities, and probably from a few vital organs, straight to her face.

Jen, between patients, was walking past. Had she overheard Mark’s titanically not-suitable-for-work innuendo? She slowed. Cocked her head. Pivoted on her heels. Ancy’s promotion slithered down to the pit of her belly as Jen marched up to her and pulled her aside, a thunderstorm brewing in her eyes. “Is this guy giving you a hard time?”

Fresh guilt welled up inside Ancy, and she was sure her cheeks were as red as if Jen had targeted her with a laser pointer. Jen didn’t have a clue, and it made Ancy feel like a big, fat liar.

“I um, got something in my eye.” Jen shot her a strange look. But it was the only thing Ancy could think of on such short notice. She turned away and pretended to wipe at her face. When she looked again, Jen was

with another patient. Ancy had never kept a secret from her best friend before, and she was starting to hate the way it made her feel.

Maybe she should tell Jen and just get this whole thing of her shoulders. But then Jen would be obligated to tell Doris, and Ancy wouldn’t blame her if she did. And she’d lose her job. Her watch’s second hand swept up to the 12.

Back to Mark. The mitten, the bag, and the wax came of, and she began to manipulate his hand through range-of-motion exercises, bending and stretching all his fingers, careful not to apply too much pressure

to the still-healing surgery scars. His hands were muscular. Strong hands, dependable hands. the hands of a man who would stand by her through whatever life threw at them. And he wouldn’t leave her the way Steve had. he way her father had left her family.

“Nice technique, Ancy.” Doris’s voice behind her shoulder made her flinch. The woman didn’t approach like a normal person, she appeared. Ancy had never once heard her coming. “Young man,” Doris said, skimming over the floor and coming to stand beside Ancy, “our Miss Robertson is highly qualified in her specialty. She’s one of the best.”

Wow. It wasn’t every day Doris handed out a compliment like that. Could it reflect an intention to recommend Ancy for the promotion?

“Of course, Fidelity General Hospital is soon to be blessed with a second, equally qualified therapist. He’s one of our alumni. Your case might prove especially interesting to him.” She glided away, and Ancy pictured Doris as a young, heavy-browed girl balancing a book on her head.

Her mind was racing. “Mark, do you realize what this means? It’s the answer to our problems.” Because an equally qualified therapist who didn’t have her seniority could take over Mark’s case without threatening her

promotion. Then the bit about the alumnus sank in.

Ancy loosened her grip immediately and banished the unsettling thought from her mind. “I’m sorry.” She returned to her work on his hand and whispered, “You can switch to the new therapist, and we can come out in the open.”

She pulled the curtain halfway around the bench for a little more privacy before starting to work on Mark’s other injuries. These weren’t as serious as the one to his hand, and while she concentrated on deltoidius, trapezius, and rhomboideus major and minor, she couldn’t help but notice Mark’s build on a more superficial level, which was part of the reason she’d pulled the curtain. Half the staff would be drooling over him if they saw his bare chest.

As it was, all she could manage to say to him when she finished the examination was, “Looks good.”

The curtain behind her swished open, and the scent of Obsession for Men filled her mind with images from the past.

Steve, the only guy who’d ever made an effort to understand her autistic brother and had never made fun of him.

Steve and her, in his fossil fuel–burning Mustang….

Steve… the second and last man who’d walked out of her life. A wall slammed down in her heart.

It couldn’t be him. She made herself turn around. Her arm brushed The paraffin tub, and liquid wax sloshed over the sides. A distant splash marked its landing on the floor.

Her heart did that funny flipping thing that made her breath catch in her throat.